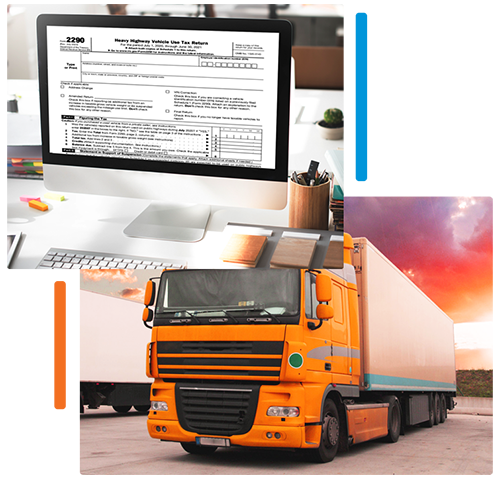 For heavy vehicles with a taxable gross weight of 55,000 pounds or more, form 2290 due date is by August 31 of every year. For newly purchased vehicles, form 2290 must be filed by the last day of the month following the month of first use.

For example, if your vehicle was first used on a public highway during the month of July, then you need to file your form 2290 between July 1 and August 31.

If you want to pay tax for additional taxable trucks registered in your name for any month other than July, you must file separate 2290 forms for the months during which the vehicles were in service.

For example, if Joe purchases a new taxable vehicle on 3rd November 2021 and drives it home from the dealership on a public highway, then Joe has to register the truck in his name and file a separate form 2290 reporting this new vehicle on or before December 31, 2021 for the tax year 2021-22.

Penalties for not filing 2290

Based on these rates, an HVUT liability that was originally $550 would climb to over $700 by the end of the five-month period of law-breaking. In addition to these federal penalties, many states suspend the registrations of vehicles for which proof of HVUT payment has not been provided.

HVUT evasion penalties can be even more significant, resulting in fines and incarceration, as illustrated in the case of one owner of a small trucking company who was found guilty of HVUT evasion through the continuous re-titling of his vehicle. For his crime, the owner of the small trucking company was sentenced to serve four months in prison and an additional four months of electronically monitored home confinement. He was also ordered to pay a $2,000 fine.

Penalties for HVUT non-compliance for states are even more costly. The Secretary of Transportation has the authority to withhold up to 25 percent of the state's Interstate Maintenance funds [23 U.S.C. 104(b)(5)] if it fails one of its periodic compliance reviews